Posted on May 8th, by Evan Thomson in General, Uncategorized. Comments Off on Wimmera Band Group Annual Celebration – 2017 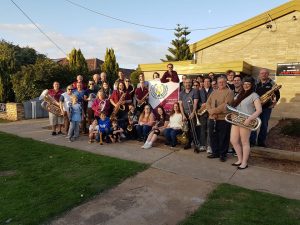 We had the pleasure over the weekend just past to spend time in both Warracknabeal and Stawell. The purpose was two fold: catch-up with some good friends at the Warracknabeal & District Band and also participate in the Wimmera Band Group’s Annual Celebration. This years Wimmera get-together was hosted in Stawell by the Stawell City Brass Band.

Our involvement with the Warrack Band is an interesting one. Two of our former members are now actively involved with the Warracknabeal group. Jason and Maxine Wright both played with us for a number of years as young members and Jason now is the Musical Director at Warracknabeal. Maxine is a full-on participant as well.

Adding to that, one of our current members Rodney Ashfield was a member at Warracknabeal for some 50-odd years, including a long stint at the top as their President.

WCB headed up to Warracknabeal, Horsham and Ararat last year on a bit of a long-weekend jaunt and we decided to do it all again this year because why not!?! Our trip last year saw us play a concert with Ararat City Band and it was a pleasure to catch up with them again.

We arrived in Warracknabeal on Friday in dribs and drabs (car pooling and work commitments), staying at the delightful Warrack Motel. After a quiet night of stories and one-upmanship, we headed over to the Band & Scout Hall for a day-long rehearsal. There were plenty of worn embouchures by the end of the day!

That evening we had planned a movie night with the Warrack Band at their hall. That however never quite eventuated, as early in the evening the power to the hall failed. By torchlight we all reminisced and did whatever it is that musicians do when the power is out (but the drinks are still cold).

A chilly Sunday morning was our overseer as we checked out of the motel and took the hour-long drive back to Stawell. The format of the day was one that WCB has not been involved with in the past – it was a really nice day! Each of the Wimmera-based bands performed a single marching piece along a small section of closed-off road out front of the Stawell Town Hall. Once they’d all marched, all the bands involved joined together for a mass march. We first played Slaidburn, followed by Moray Firth. 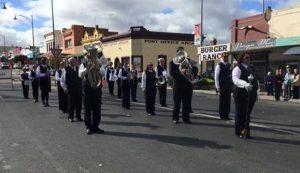 Following a little time for lunch (including some Raunchy Rooster), each band performed individually on stage inside the Town Hall. Due to our three hour drive home and with quite a few members on a set schedule, we were unable to stick around to hear the other bands play. This was a big disappointment to us – the crowd was big and enthusiastic. We would have loved to added to it.

We hope very much to be invited back to participate again next year!