Posted on July 9th, by Michelle Forsyth in General. Comments Off on Three Weeks To Go!

With only three weeks to go until From Stage to Screen, the band’s rehearsal on Thursday was intense. I should clarify that it wasn’t a bad type of intensity; it was the type of intensity that encourages people to work hard and practice and get excited for what we’re about to do.

We worked hard on a few pieces, especially Superman and Jurassic Park. Thinking back to what we sounded like when we first started working on pieces for the concert, it is evident that people are putting in a lot of hard work to make this the best gig the band has ever played. 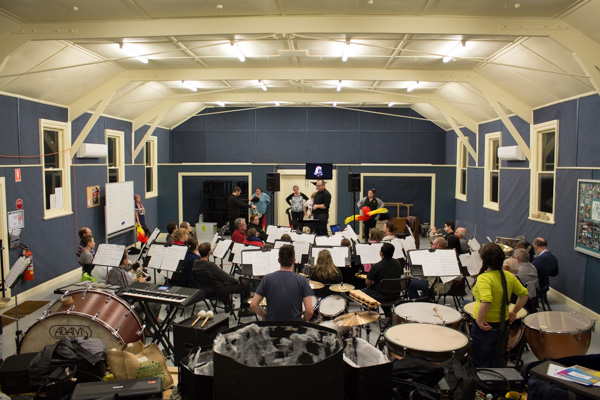 Rehearsals well underway for our Stage to Screen concert

Including this week we only have three rehearsal’s left until the big day and that is both scary and exciting. We still have so much work to do over the next three weeks, but I am confident that the band will work hard in rehearsals as well as work hard in their personal practice time.

As one of the band’s Assistant Musical Directors, it is so thrilling to be part of such a fantastic community group during what is arguably the most exciting time during the band’s 28 years.

I can’t wait until this week’s rehearsal, because if it’s anything like it was last week then we’re on track for a great night at From Stage to Screen. Make sure you get tickets before they run out!