Only a week to go! A reflection on rehearsal

Posted on July 26th, by Larry Hamhougias in General. Comments Off on Only a week to go! A reflection on rehearsal 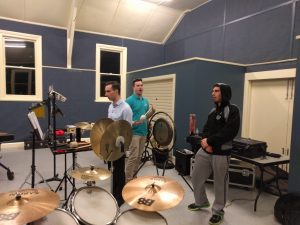 For me, the first indication that this rehearsal was going to be a big one was when I drove into the car park. It was packed! There were barely any spaces left for me to park in. It seemed that the whole band and then some were there.

The weather was cold and windy that night, however not even that could keep our dedicated members away.
As I approached the hall I heard the tell tale signs of people warming up their instruments inside. I was running a bit late so when I entered the hall I saw that everything was already set up with everyone sitting in. Why is it that everyone is extra dedicated in the weeks leading up to the major concert?

As I greeted my fellow percussionists I felt an air of excitement among them. Everyone in the band wants to perform at their best so every rehearsal is a chance to work out any issues they might have come across during their practice during the week. Therefore we were all eager and excited for the rehearsal to get underway.

As we all turned our attention to our musical director Mat, the rehearsal began.

The next few hours went by so quickly. It’s true that time flies when you’re having fun! During rehearsals we do have a bit of a laugh but mostly we are working hard refining our craft. There never seems to be enough time to cover everything, that’s why it helps that Mat always comes to rehearsal well prepared in what we need to work on. The whole band really works together to make rehearsals run smoothly and effectively.

After rehearsal is over the band works together to pack up the hall. This is a highlight for me because we get a chance to socialise with the other band members. After everything is packed up, those who can stay sit down and have a social chat over a packet of Doritos (or whatever is on special at Coles!). The social interaction between members is what really makes playing in a band so fun and is what keeps me coming back each week -as well as the awesome music!

So as I left rehearsal that night I was feeling both excited and a little bit daunted by the upcoming gig, as it is the band’s 30th year celebration. But I know that on the night we will all come together as any good music group does, and support each other to put on a really great show.

I can’t wait to nail every piece and hear the audience’s reaction. All our hard work and dedication will definitely be worth it!

Tickets for our concert can be purchased via the Wyndham Cultural Centre. We really do hope to see you there!