Posted on June 7th, by Mat Taylor in General. Comments Off on Major Concert – Rehearsal Thoughts 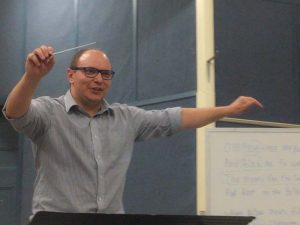 So last Thursday marked the first real pedal to metal rehearsal for the band’s 30th anniversary major concert. I am incredibly honoured to be conducting the mighty Werribee Concert Band in its 30th year. Being in the band for the past 15+ years means that the band, the work we do and the people involved are incredibly important to me, so I am going to work my guts out to ensure this concert is a ripper!

This year’s concert has a very varied repertoire list that you can categorize in 3 ways.

Solos: Featuring a sax duet with two of our life members and a beautiful piano solo accompanied by the band.

Community Features: We are lucky enough this year to be working with local vocalist Shelley Rodrigues and the Laverton Community Choir. We love having guests at our rehearsals and performances!

Anyway, as I mentioned this week was time to really put the foot down! We focused on 3 works – Homage, Seal Lullaby and Hounds of Spring.

Homage is an incredibly difficult work that is built around the choral of Saint-Sèans Organ Choral – you might also know it as the theme from Babe. The rehearsal focus was finding that melody, understanding it and playing it with beautiful expression.

Seal Lullaby is a beautiful slow work originally set for choir and converted for band with solo piano. We are lucky enough to have a member who’s got mad piano chops – Norm Anderson – who will ensure this amazing melody will shine.

Finally, Hounds of Spring which the woodwinds have put some real practice time in to so far. It is sounding awesome already.

As it stands the band is on track for a stellar 30th anniversary concert that will pay tribute and respect to our amazing heritage as well as help us look forward and plan the next 30 years! I can’t wait for the 30th of July!! BEST DAY EVER!