Posted on July 16th, by Michelle Forsyth in General. Comments Off on Jurassic Park, Frozen and Over-Confident Soloists

Our Musical Director, Mat Taylor, was away due to work commitments so that meant I was in charge of rehearsal. Despite feeling a little bit under the weather and having to step out for some (not so fresh) air, it went really well.

The band had obviously worked hard at home throughout the week which is always great to see. It makes me extra excited for the performance and it also makes rehearsal a lot easier each week.

We started with Jurassic Park and a trumpet sectional in the back room. When the trumpets came back to the group they sounded much better than they had previously, and they kept getting better and better the more I worked them – well, mostly. Later on a certain trumpet player (not naming any names, Elliott), came up with a good tactic about playing as a soloist; “I couldn’t have been wrong, I’m the soloist.”
We also focussed on getting the accompaniment together for our two pieces with vocalist, Shelley Rodrigues, who we will be rehearsing with at our next rehearsal. It’s all sounding beautiful and it will sound ten times as great when Shelley steps in.

A majority of the rehearsal was spent on what is definitely one of my two favourites pieces, Frozen.
It’s no secret to anyone that knows me that I love the movie Frozen. I’m basically a six year old. I love it so much that my boyfriend and I sing it regularly when we’re in the car – and a lot of the time it isn’t even my idea.
This piece was a late addition to the set list and for the amount of time we’ve had it, it is sounding particularly good. I think it’s partly the excitement at how close From Stage to Screen is getting and the fact that the chart is a heck of a lot of fun to play.

There are only 10 days left until the gig, so if you don’t have tickets you should probably purchase them now from the Wyndham Cultural Centre. After yet another terrific rehearsal, it will definitely be a night not to miss. 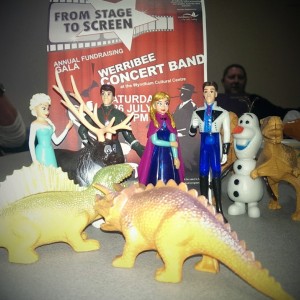