Posted on July 2nd, by Michelle Forsyth in General. Comments Off on Five weeks to go! 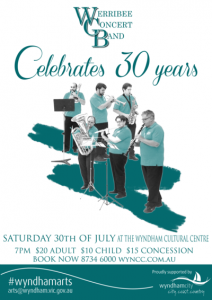 As we prepared for rehearsal on Thursday, it started to dawn on a few members that there were only five rehearsals left until our major concert. With that in mind, we decided to sit in at rehearsal and do some hard work.

We started with some of the pieces we are performing with vocalist Shelley Rodrigues. We worked hard balancing the classic ‘Werribee Concert Band wall of sound’ that we love to produce, and made what we think will be a nice accompaniment for when Shelley joins us.

One of the other pieces we have been struggling with is called Homage, and on Thursday we did a great amount of work ironing out the kinks. A lot of the issues were in the basics that we do when we play music, whether it’s the way we sit, breathe, or the way we hold our instruments. After a stern talking to from our musical director, Mat, the band quickly straightened up, focussed, and now we’re well on our way to our performance on the 30th of this month.

It seems like only yesterday we were talking about having twelve rehearsals left, and now with only four to go, we’re starting to get to the pointy end of things.

Our thirtieth anniversary is a huge milestone and we are all so excited to showcase what we’ve been working on. If you don’t have your tickets yet, purchase them ASAP! The early bird offer end THIS WEEKEND on the 3rd of July.

You can click here to buy tickets. Get in soon or you may miss out!