Posted on October 10th, by Michelle Forsyth in General. Comments Off on Band Camp 2014!

On Friday the 26th of August, we all left our homes for the weekend and went down to Torquay.

Once we got to the camp site and we had set up, we all sat in for our first rehearsal at 3 o’clock.

We played a couple of new charts, but we mostly played pieces that we haven’t played in a while, or, as myself and Corrina Busby (the band’s other Assistant Musical Director) were picking most of the pieces for camp, we played ones that our Musical Director, Mat, really doesn’t like.

The stand out piece for camp was definitely an old favourite, Pilatus, which somehow made its way into the camp music without me or Corrina knowing about it.

We had a couple of rehearsals on Friday, and then we had free time. This included playing Guitar Hero, Disney Sing Star (which sadly does not include many songs from Pocahontas), and the general band camp shenanigans. There is a saying that goes “what happens on band camp, stays on band camp” and I believe that members of the group would like this statement to be maintained. 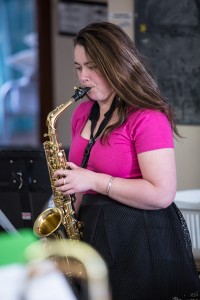 Corrina doing a bit of practice at camp 2014

It goes without saying that Saturday morning was rough for many people.

We had our last three rehearsals on Saturday before the AFL grand final. While many people stayed at the camp site to watch the football, some went to the beach, slept off the night before or just went outside for a kick of the footy. Although, one member decided to play soprano saxophone for two hours non-stop. It was not a fun time for many people, mostly those that had been up all night the night before.

Saturday night also included a trivia night! Mat was kind enough to prepare the quiz, and it was great! Although the science round only had a handful of actual science questions, there were other rounds such as a movie round (which my team did not do too well in) and a baby food round. As my team won, we got to fight over some green Play-Doh, some Lego, toy surgeon tools and whatever was left over from the baby food challenge. I suspect these were very last minute prizes.

We were leaving the camp site at 12PM on Sunday so that we could stop for lunch on the way to the B-24 Restoration Hangar back in Werribee. This wasn’t just because we’re interested in restored planes, but we were playing there for the 70th birthday of Australia’s only surviving B-24 Liberator.

However, before we leave camp there is always a tradition that takes place where we try to eat all the food that is left over so that it doesn’t go to waste – or rather, in the bin.
In past years there have been watermelon eating competitions and milk sculling competitions, and while this year was good, it was not as much fun as watching Elliott eat watermelon off the ground.

One of our percussionists, Jamie, was dared to eat the left over tub of ice cream. There was at least half of a 2 litre Neapolitan tub left over, and Jamie ended up scooping it out with his hands.

And last but not least, Corrina, Ray and Jamie tried to feed each other apples and eat at the same time. It was a confusing time for us all.

Over all, camp was a great weekend full of music and fun. We all got to know each other a little bit better and we played some great music that we will be using for future performances. If that isn’t a successful camp, then I don’t know what is.